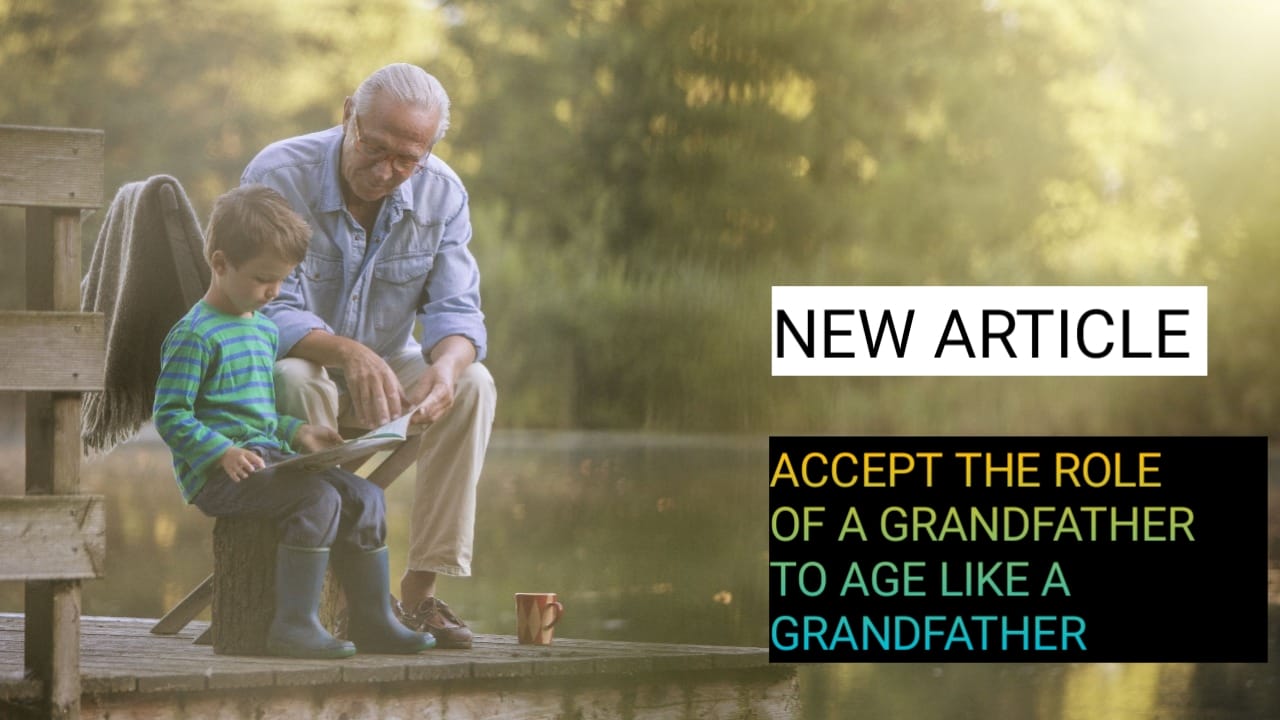 Think of seventy-year-old Sylvester Stallone in his new action movies alongside many other testosterone-filled action and sports stars. Do you believe he accepted him-self as a grandfather? Formally he may be a “grandfather,” but he didn’t let this role define his whole being. For most people, it seems natural to behave older when you get older, becoming so mature and serious that you forget life is not only about being responsible. But still, you expect your body to be strong and healthy, right? You don’t allow yourself to live life to the fullest, but you still believe that you deserve to feel healthy.

Observe how older men behave, losing interest in doing business, achieving, dressing like a man, and speaking with a man’s tone of voice. They start to become soft and gentle, weak and passive, all the testosterone declines very quickly. It is very similar with women and their natural traits.

Years ago, there was an interesting experiment. A boy in his twenties was chosen for the test, he was very calm, gentle, and a bit of a shy guy, who had trouble with girls. During the experiment, they gave him one thou[1]sand dollars, a motorbike, dark leather clothes, and sent him to a pool club where he arranged a meeting with a woman with whom he played pool, smoked cigarettes, and drank alcohol. The study was to measure his testosterone levels before and after his fake transformation and it turned out that his testosterone levels more than doubled! This study shows how the roles we take can dramatically affect our entire lifestyles, our bodies, hormones, and life energy.

It is difficult for many people to notice that identification with a given role affects their biology and psyche. Adopting the attitude of a mature father, mother, grandfather, or grandmother causes their personality, behaviors, and psycho-physical possibilities to adjust to this. After several years of raising their children, let us note how even young parents have a problem weaning themselves off acquired habits.

They can’t remember what life is about, that it is not only about being a mother or a father and, unfortunately, many fail to ever do so, resulting in the breakdown of marriages. After all, if in the past we dreamed of meeting a partner, falling in love with them, and spending time together, we certainly did not think about family time only. Being surrounded by children all the time, without all these exciting and passionate emotions re[1]served for adults, can destroy your mindset and negatively influence children, too. Is it possible for children to dream of their own marriages in the future when they only see boredom, arguments, and lack of passion?

Many factors play a role here. Yes, on some levels, being a mature parent has a very positive effect on our bi[1]ology and psyche, adding new vitality. This is easy to understand by imagining the role of a father who fights not only for his own interests and needs now as he is also responsible for children, thus becoming more assertive, decisive, and ambitious at work. He is motivated by something more than his own needs.

You can even see that people of this type are better perceived in business and are given more trust. Many have found that, though they have sufficient skills for a given job at twenty, they are not as quickly accepted as a thirty-year-old with the same abilities. Older age is associated with maturity and grounding in life, if someone has children the employer may believe the employee will be more persistent and determined at work. That kind of person cannot fool around all the time, quit his job and look for something new just because of a mood change, unlike many singles, without serious life responsibilities, living in a world where if you don’t like something you can change it instantly.

So, to some extent, maturity is fine and makes you stronger. The other side of the coin is darker as it has the far-reaching consequences of denying yourself simple pleasures of life at every turn. Adopting that responsible, boring pose may suck motivation out of you.

No, but it does require awareness of the problem. If we unconsciously give in to our new artificial roles like being a grandfather, grandmother, or a responsible parent only, we also unconsciously fall into the trap of neglecting our true selves, which still crave to feel young, motivated, excited, and complete because life is not only about being a father, just like it’s not about eating only apples.

It is documented that even holding a child in your arms lowers testosterone levels and raises estrogen. Men don’t need to avoid caring for children and expressing family affection, but still, if they neglect the equal development of other planes of life they gradually and inevitably lose their biological identity and health.

If, as a young man, we do not stimulate this primal male energy, which is focused on domination, selfishness, conquering, winning, bragging, and physical activity, etc., then our life gradually begins to die out.

This type of weak father is well prepared for an even weaker attitude, they are prepared to play the role of a humble, sweet, submissive, and caring grandpa. And just like the average twenty-year-old stuffed with testosterone can’t even think of becoming a grandfather, a forty-five-year-old father who has neglected his primal male nature for a decade finds it extremely easy to accept this new role. Accepting that you formally became a grandfather is fine but people do much more. They implement a completely new set of traits and behaviors which make them older in the blink of an eye.

Unfortunately, the hormonal imbalance carries further consequences, and our mentality projects more and more onto our physicality. Fortunately, by being aware of these dependencies between our psyche and physicality, we can reverse this process at almost any age. A good example is one businessman from Silicon Valley who took the easy way but utilized the same concept of hormonal balance.

Instead of working on himself, he only took doses of artificial testosterone but he achieved similar changes. Even his wife confirmed that their male-female relationship immediately changed for the better, but his already expiring professional ambition also changed, and he started to be successful again. A hunger for new achievements and conquering new markets quickly re[1]sulted in progress in all areas of his life. And all of that was achieved just by taking testosterone. I don’t recommend testosterone therapy because there are natural methods of working with hormones, but I am not a doc[1]tor. The example of the student sent to the pool club shows some of these natural techniques.

Testosterone levels can be changed through our daily behaviors. In one study, measurements of this hormone were taken in football players before, during, and after the game. The losers saw their testosterone drop by an average of half whereas the winners’ testosterone levels doubled. This shows that we can consciously influence hormones by exposing ourselves to specific life experiences or changing certain character traits. Suppose someone spends more time training, proving competence, competing, or arguing, this hormone will be automatically stimulated. Alternatively, if he spends more time caring for children and has a relaxed lifestyle, the opposite results are achieved. It is easy to see that this person, regardless of gender, exudes more feminine qualities, so the male hormone drops.

If we choose to walk or jog more often instead of aggressive interval training, or we prefer to relax in front of the TV more often instead of doing tough physical work, or spend most of our time working in customer service, where our attitude must be positive, nice and submissive, then all these activities raise our estrogen and lower testosterone. The hormones, in turn, affect our biology, aging, and immunity.

The far-reaching psycho-physical change caused by male-female hormones is most visible in sports, where women in aggressive disciplines, additionally supplemented with steroids, undergo a visual metamorphosis. Their shapes become sharper and more angular, their shoulders broader, jaws sharper, and the definition of the muscles more visible, the excess of the opposite hormone rebuilds the body from what was once considered classic female beauty, based on roundness, curves, and soft shapes. Women and men can choose how they want to look, but they must still be aware that their daily behavior, types of activities, and the character traits that they nurture in themselves translate into both their appearance and influence their entire biology and mindset.

These dependencies are certainly understood by Sylvester Stallone, who retains many of the features of a young, dynamic organism. His mindset and external appearance allow him to reach for more on every level of life.

In identifying ourselves fully with the role of a grandmother or grandfather, we adopt a submissive attitude towards life from the very beginning. We accept increased dependence on others and we become passive and distant from the habits of youth.

We achieve an utterly submissive position, which takes away the power from our psyche and our body and, deprived of vital energy, the body then naturally ages faster. It is prone to many diseases just because of this.

Nowadays, we are lucky to be able to find inspiration on the Internet. We can learn how to look, how to behave, and what can be achieved as an older adult. By surrounding ourselves with such patterns and role models, even by subscribing to social media channels, we automatically get closer to their proposed lifestyle. Instead of letting age define our behaviors and roles, let’s gradually implement the behaviors characteristic of youth and vitality.