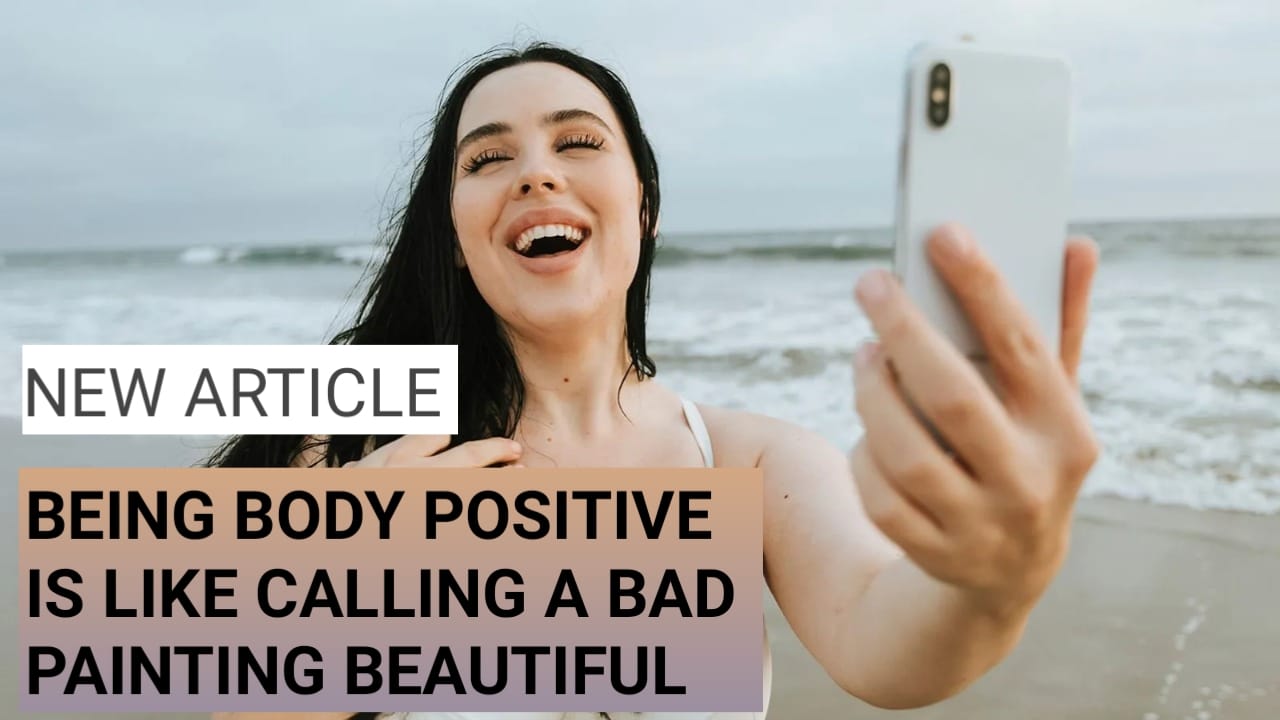 Most people feel comfortable with their bodies mainly because someone once invented clothes. One of the basic human needs is dignity and a well-received image. Clothes help to create this and, more importantly, mask defects.

Nevertheless, human life is a whole spectrum of events, activities, and experiences. We may not be aware of how much of them we give up just because we are not satisfied with what our body looks like without clothes. Many obese people who would like to sign up for fitness training and lose weight will probably never take this step, because it is tough to cross the border of shame.

Good looks make life easier and open completely new opportunities that we do not reach for out of shame. People with a weaker body are less likely to go to the beach or take a bath in a public place; such people will also use the sauna less often, especially co-ed. They will avoid a massage and won’t surprise their partner with a spontaneous striptease, they will not feel comfortable at a dance club and the idea of a pool party with lots of people dressed only in swimsuits is unthinkable for them. Poor appearance can also significantly restrict their freedom and self-expression in many other scenarios.

Many of us will go through our lives unknowingly avoiding many possibilities, activities, or even career offers. We may refuse them, not because we don’t like them, but because we are afraid to admit that we are ashamed by the quality of our body.

People love to fool themselves by saying that only the inner self is important, not the looks. I graduated from a fine arts academy (I studied painting) and have a few observations about arts and aesthetics. When people arrange their apartment, they always emphasize the need to have beautiful elements, beautiful furniture, paintings, and subtle details. When they go shopping and see something ugly, they intuitively criticize it and emphasize that it would look ugly in their apartment. Everything must be beautiful, harmonious, proportionate, and tasteful. The same people believe that their looks or their partner’s looks don’t matter and it’s all about personality. It is a lie, mainly told by ugly or lazy people. They keep telling lies because it’s not easy to call ourselves ugly as we call the furniture or a painting ugly.

As emotional beings, we have a great need to express ourselves. We express some emotions with the mind and others with the body. That is why so many of us like to drink alcohol so often because after a few drinks, we become excellent interlocutors who openly discuss topics that previously seemed dull. Suddenly we can talk about them with excitement and passion, with alcohol most of us lose the need to control ourselves and can express thought without unnecessary blockages and resistance. We do not overly obstruct views and feelings, which adds spice to the conversation. This freedom makes us feel great. A good body is like a good alcohol. Suddenly, we are passionate about dance because now we feel attractive with every move, when previously we were sure that dancing was not our thing. Suddenly we are social creatures, confident in any social situation, just because we take care of our body.

Perhaps we have been taught to underestimate the importance of appearance and celebrate our “depth” and personality. But let’s look at action heroes like Sylvester Stallone, Arnold Schwarzenegger, or Jason Statham.

Imagine the believability of action films if their characters had neither the appearance nor the voice of a typical, well-developed man or woman. It just doesn’t fit in with these movies. Sharon Stone would be much less likely to play the role of a seductress in “Naked Instinct” without proper looks. Channing Tatum would look comical in the “Magic Mike” striptease scenes if he was seriously overweight or had other physical flaws. Their looks allowed them to play their roles authentically and attractively, stimulating certain emotions in viewers.

Similarly, in our lives we stimulate different emotions in people depending on our physical appearance. Imagine if you dream of being perceived as sexy or intimidating, but you look underweight and have a weak and shaky voice. No matter what words you use, people won’t perceive you as sexy or intimidating because besides words, there is an entirely different and vibrant world. The world of body language.

The appearance or sound of your voice is part of your body language, it provides us with a huge amount of data about a person. Sometimes the data is very accurate, sometimes we are deluded. Despite his incredible talent, Bruce Lee still had a problem proving his skills because he was small. The stuntmen or martial artists appearing in his films did not believe that he could beat them, so they tried to fight him again and again. Meanwhile, twice the size of Bruce Lee, the casual nightclub security guard may not even have special skills, but still, among drunk people in the middle of the night, he will command more respect than a martial artist half his size. Appearance, therefore, does not have to tell the truth about us but is a critical element of other’s perceptions of us and has the power to make our lives easier or harder.

Awareness of the body can also help in our eternal search for who we are. Someone may spend half of his life trying different studies and disciplines to search for his passion or true self, only to finally discover that it was impossible to find them only on an intellectual level. If you want to be a chess master, then looks may not define you as much but to become an action hero like Sylvester Stallone, no matter what skills you have, what education, or how great the script of a movie is, if you don’t look like an action hero, the viewers won’t feel specific emotions connected with your appearance.

Suppose you are not aware that proper appearance is a part of your identity and you search for your identity on an intellectual level, improving acting skills, improving your accent, etc. In this case, it may lead to nowhere. If you want to be a pirate, you should look like a pirate. Many actors admit that magic happens when they put on their character’s costume, once makeup is applied, they build a body for a specific role, and then it’s much easier for them to behave like their movie character. They instinctively feel it and are able to play a role without overthinking.

Studies at the Academy of Fine Arts have taught me that the body, like the world around us, is also a spiritual creation. It looks like a physical object but expresses emotional states and depth of character. At first glance, many of us can distinguish a woodcutter, a policeman, a  scientist, or a ballerina because we express many features with our appearance.

Rooms in our houses seem to be only physical objects but they also have “souls” on a certain level, a baby’s room looks completely different to James Bond’s. Entering these rooms, we feel a completely different energy. In the child’s room, we will notice more colors, rounded and pleasant shapes, warmer light, and a little mess. A soldier’s room would be very economical, cool and neutral-colored, clean and ordered. These rooms have completely different effects on us and yet they are only physical objects. It’s not their physicality, but the underlying energy that works emotionally on our senses.

Similarly, working on the body and our appearance can help us create different energies in ourselves.

Thinking in terms of energy helps a lot in shaping our looks. Imagine a man with a bit of an ugly face and almost no hair. In the past, he dreamed of looking handsome but felt it was impossible to achieve. After some time, the same man discovers the world of energy. He now understands that men look good when their energy is more masculine, and there is no need to necessarily be handsome. He decides to lose ten pounds of weight, build some muscles, change clothing style to mask a few weaknesses, and create more solid look. He gets rid of his hair completely (a bald head may look masculine, but bits of hair here and there don’t), he also grows a beard and suddenly starts looking like a lumberjack leader. He may not be handsome, but women will perceive him as attractive because of his masculine energy emanating from his physical appearance. Here, he was able to “design” himself in a way that his ugliness was replaced by something different. In order to achieve it, he had to understand the basic principles of human and masculine/feminine energy, and after the understanding, he implemented necessary changes instead of remaining body positive.

If you want to avoid older energy, you cannot support those traits. If our body was just like a book cover, the problem wouldn’t exist, if you change a book cover it doesn’t change the book, and vice versa. In the case of a body/ mind connection, our physical appearance influences our mind and other people’s minds very strongly. Simply looking in the mirror every day and seeing bad posture, an overweight body, bored eyes, and unfit clothes weakens one’s self-esteem and biology. The “body positive” ideology won’t help here because, on an energy level, we not only see the body but we feel the emotions and personality behind it. Does your body reflect the personality you want it to reflect?

You may find many spiritual teachers telling you that the body is unimportant and only temporary, but most of them still somehow create their visual style. They have long, grey beards for example, which projects wisdom. Without a beard they would look like a regular person, not an oracle. Or they may wear whiter and brighter clothes to emanate inner light and purity on outside, they wisely use the attributes of visual appearance to increase their spiritual perception in the eyes of others. Similarly, priests use very characteristic styles of clothing, even churches are designed to let us feel something significant.

Most European churches are huge and dark, projecting deep, mysterious, spiritual energy, making you feel so small inside this monumental building. Just standing there, hearing the echo of the priest’s voice flowing through one huge, open, dark space, gives us a feeling of contact with something bigger than us. Imagine a church being not any bigger than a regular grocery store, with lights on and no spectacular paintings, ornaments, or stained glass. What would you feel then?

Similarly, our physical appearance creates and projects feelings and believing in “body positive” ideology usually distracts our attention from working on ourselves. Age is not an excuse or an obstacle in this case, because our energy is not only about beauty or youth.

Churches are not necessarily beautiful either, and are certainly not young, but you feel power when in contact with them. Or you can look at the average grocery store where all the pieces, furniture, and structure are new and nicely designed, and not feel anything special. Just an ordinary shop. Visual power doesn’t just come from beauty and youth.