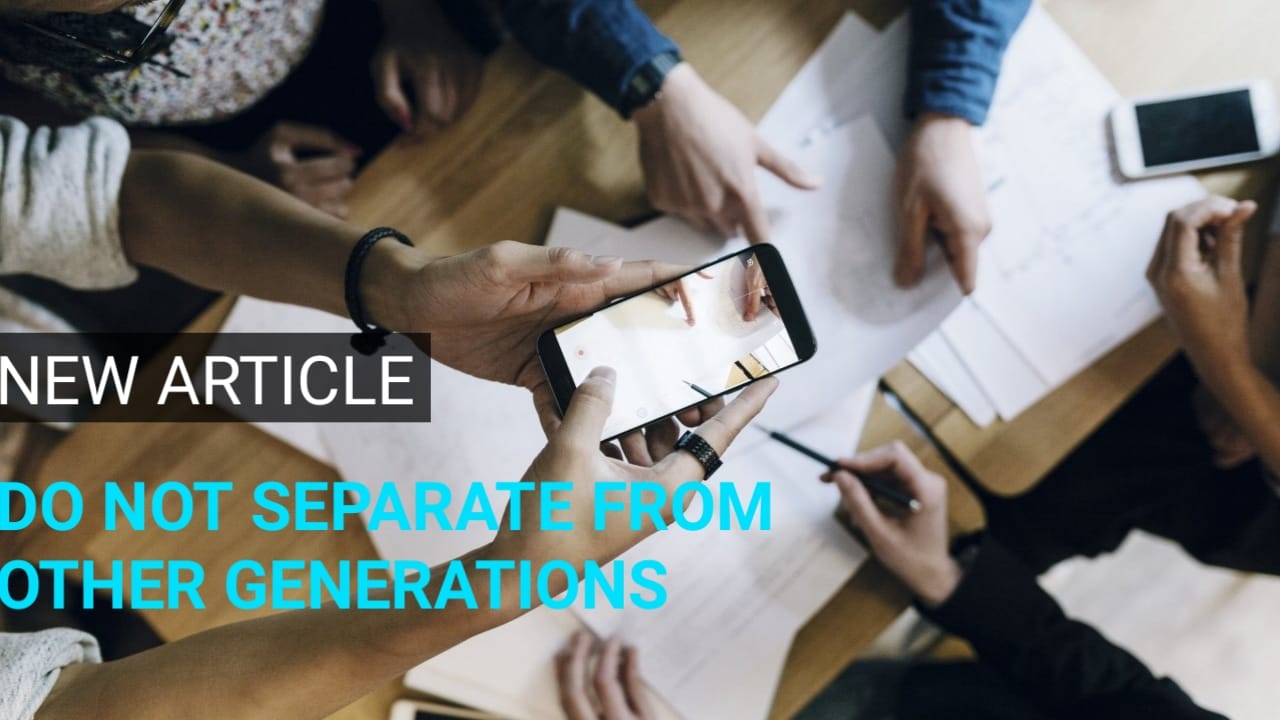 It’s a natural tendency to interact with people of a similar age than with people who are of a different range. After all, we talk most freely in a group of a similar age. We understand each other better than when we find ourselves, for example, mixing with people from different generations at a family event. We quickly observe that everyone is becoming a bit weary and even embarrassed by the lack of mutual understanding; people would prefer to spend this time in separate age groups. Younger people who are particularly sensitive to boredom suffer from such interactions, having an inner urge to remove themselves from it. However, they do not always dare to indicate their need, so they get tired during many hours of meetings.

Fortunately, such multigenerational interactions are not frequent. If we want to play tennis or football, we naturally look for people from a similar age group. If we plan an intense trip, we also select people in terms of fitness and age. People of similar age cooperate most often at work, too. Apart from family meetings, we are not “threatened” by frequent multigenerational interactions.

But should this be a reason for satisfaction or anxiety? Let’s observe how grandparents behave in the company of their grandchildren. Most often, they are packed with positive energy, vitality, and a sense of deeper purpose when spending time with children. It is easy for them to show their feelings, and we notice the light in their eyes – the excitement that is rarely present at their age. This says something, that youth and old age have their attributes and different styles of behaviour and mentality. By staying in just one age group, we begin to become more and more harmonious with that group. It is worth taking advantage of this observation and turning the situation around because, for an older person, the company of younger people stimulates them to keep up and synchronize with their youthful energy.

University professors maintain regular contact with young people and it is easy to see that teachers are the group that maintain mental freshness all the way to old age. You may meet a seventy-year-old teacher who can have a lengthy conversation with a twenty-year-old in which both parties are actively involved.

The younger will be impressed with how the elder has managed to maintain clarity of mind, openness, and a high intellectual level, which is not popular in the era of oldies who only watch TV and take their dogs for walks. Real life is diverse and if we want ours to be rich, then separating from younger generations is the worst idea. What variety is it when, at the age of fifty or sixty, we meet only with representatives of our generation? We do not give life a chance to fascinate us. Young people have endless ideas for activities, meetings, and experiments, they remind us to reach for something different and new every day, or at least once in a while. Young and old can be each other’s best and most natural teachers.

Elders have values that stem from their mature age and from the fact that they have experienced more in life, had more time to think, have more negative and positive events happened to look back on. Young people look forward to learning new things from their elders, often helpless and a bit confused with life and not knowing which way to go. Their elders can inspire them, but only if they can talk interestingly. There is no chance at being an interesting older person when you avoid regular con[1]tact with younger generations.

If you want to become mentally and physically younger, there is no need to overthink that. Just spend time with younger people and the rest will happen on its own. Separation from other generations is de facto separation from life itself, and it speeds up mental and physical ageing. If we want to keep this life in its pure form for as long as possible, we should not isolate its parts.

I remember hearing about a fantastic initiative in which older and lonely people were connected via the Internet with students from other parts of the world. Young students learned the language by practicing conversations, while the elders received a cure for loneliness. Another solution was to combine nursing homes and kindergartens, bringing a youth to the nursing homes that is far from the gloomy vision of older adults hearing only about each other’s diseases, ailments, and frustrations. It is impossible to create fresh energy to revive them and stimulate their immune and nervous systems if they spend their time this way, alone with others of the same age. There is no chance for an exciting tomorrow if we don’t get fresh energy from the outside world. There is a theory saying that happiness comes from within, not from the outside world. This is only partially true.

The tendency to separate into age groups begins early and is generally unnoticeable. For example, parents of young children assume responsible roles. It is automatically more difficult for them to be among singles or childless people, so they naturally and gradually lose friends and acquaintances thinking that this is how it should be. After all, they are now responsible parents, but this mentality comes at a price.

They will not pay it at this point, but in a decade, maybe in two, they will wake up in a place from which there will be no easy way out. They will find themselves in a situation where they have neither friends nor acquaintances, and their children want to move out. Therefore, we should criticize both ourselves and others who follow the same path of separation.

It will not be easy to criticize young parents, and it will not be easy for them to see their wrong behavior, especially as their actions appear to be guided by responsibility. Responsible behavior always seems nobler than the frivolous joys of life, which is why it is so easy for us to cancel these small joys and give up more friends and activities because of work, children, or lack of time. But all those friends provide us with vitality, the more responsible people you meet the more tired they look. Children are not responsible at all, and they have the most life energy, right? They want to run, exercise, dance, and learn new things, they are much more frivolous, relaxed and happy than their parents. Let us learn from them from time to time.

We should treat contact with younger generations as a form of mental, spiritual, and physical stimulation. It’s not about negating your current age and becoming a parody of an adult who is ashamed of who he is and, at the age of sixty-five, wears youth sneakers for fifteen[1]year-olds. After all, we don’t have to go to parties for teenagers when we are two or three times older, we will look like their parents at best. But banquets, meetings in restaurants, cinemas, casinos, or sports events, we can attend at any age without any discomfort. I remember attending a salsa party for eighty-year-olds, it was great fun and those people looked like they were far away from dying.

The combination of youth and old age enables us to live our lives to the fullest and the funny part is that it is mostly effortless. You don’t need to overthink what to do with younger people, just a simple setup to spend more time with other generations will solve many problems on its own.

Most people don’t apply this knowledge and therefore they age quickly. With regular contact with other generations, you gain very powerful tool. You will be better than the younger people and better than the older ones, you will be a fully developed human being. Years ago, an interviewer asked the artificial intelligence robot, Sophia, what her suggestion for people who want to live a better life would be.

She answered that people should understand the idea of time and it would be great if someone young could experience living in the old body and vice versa. Imagine if a twenty-year-old man could live for a day in a seventy-year-old body, it would change his perspective on life quite a lot. Furthermore, the older person in the younger body could remind himself how life can be, and that some of this can be implemented even at his age to recreate the powerful young energy in his relatively old body. Although we cannot actually do this experiment, I believe that simply spending time with other generations fills a similar role.

The most important thing to remember is that it won’t only affect our mood, but our biology. If you only temporarily want a better mood just grab another bottle of whiskey. But if you want more power, a healthier body, and stronger immunity – do not separate yourself from other generations, no matter how old you are.