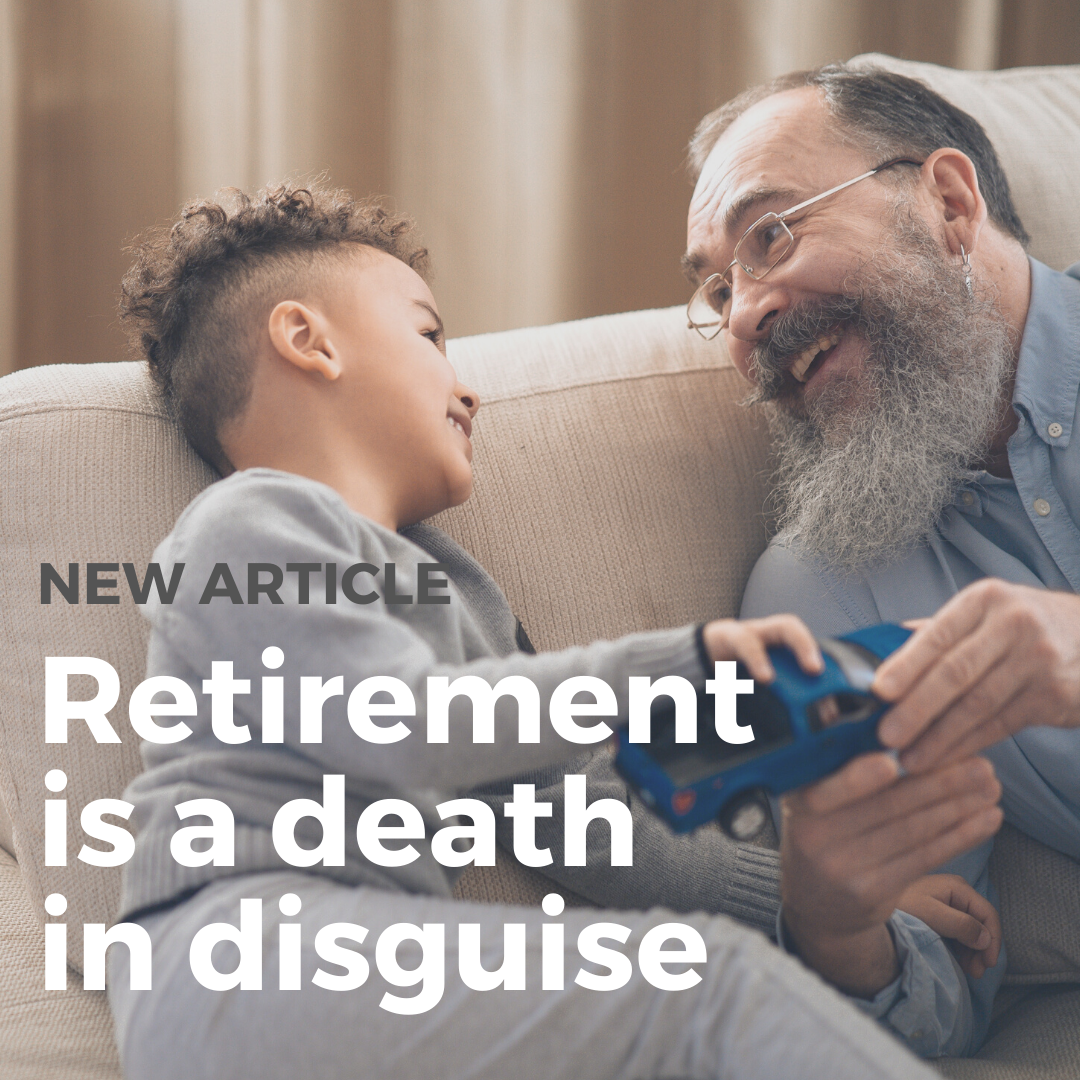 It doesn’t matter if you are already retired or not, it is what you think of the concept of retirement that matters. Just ask yourself a question – what may be one of the most crucial mechanisms that gives us motivation to live?

To have this motivation we need to be helpful. We need to feel useful not only for ourselves but for others, that’s why we find inner strength in contributing to other people’s lives. It may be in the form of work for a company or helping our family or friends, creating a strong feeling of worthiness and usefulness, a purpose.

What retirement does is cut all this out. Most people are most useful at work, and when they stop, the whole organism stops. We begin to feel useless and empty without the fuel that pushes us to live with purpose; a purposeful life is about doing something for others. Retirement is a time when you become focused on yourself too much, on doing funny, relaxing things, meeting old friends, and filling your spare time with new, random activities is fantastic in the beginning because you never had time for that in the past, but relaxation is not the only important thing in life and unquestionably not as crucial as being useful to the world. The scale is irrelevant, we can be helpful to a few people or to thousands of people, but the concept works the same. Feeling useful and needed gives us inner motivation and this motivation influences our biology, justifying our existence.

That’s why so many people die or get sick very quickly after reaching retirement. You may be young as you read this, retirement far ahead, but even accepting the idea of retirement at this moment is working against your life now. You are getting weaker by believing that retirement is natural and you deserve it after hard work. It’s like telling yourself as a teenager that your future will be tedious and unsuccessful, this approach alone is already exposing your weaknesses, even if you have not yet had time to feel this bitter side of life in reality.

As I mentioned previously, in Okinawa there are people who live to be over a hundred years old and are still very much active. The concept of retirement doesn’t exist there so they are fully active until death comes, like warriors dying on the battlefield but not passively waiting for the end to come. They don’t have time to focus on death, so death doesn’t focus on them.

Young people have similar problems with being useless. The concept of a “teenager” was developed in about 1950, before this there was only a child and a mature human being. People achieved maturity much quicker, started working at a younger age, and contributed to society faster. In current times children are forced to educate for longer, so deep inside they feel like unproductive parasites financially supported by parents or other members of society. It’s like being a boxer who doesn’t have any fights this year or next year or even this decade, but someone tells him to train anyway, just in case.

Training is only a means to something greater, something purposeful. Without it, it’s pointless.

That’s why many young people are frustrated now and have problems deciding what they want to do in life. We live in an age of abundance, theoretically, there are many possibilities to choose from, so deciding what you want to do in life should be easy. But you end up only trying and testing, finding passions or new temporary hobbies. If you are lucky in life, there is a moment of revelation.

You find someone who needs something from you, maybe a friend, and you have the skills to help him, and he will pay you for that favor. In that particular moment, you feel helpful in life! You may be fifteen or eight years old, it doesn’t matter, what matters is you felt useful, something fundamental happened in your life. Somebody had a need and you fulfilled it and started to feel validated as a human being. It is impossible to find this feeling just by studying at school because a vision to become useful in ten or fifteen years from now doesn’t give you a daily dose of motivation.

Moreover, it may lead to depression, which is rampant among teenagers. All of this is an effect of being useless for too long. After formally retiring, it’s best you find more engaging activities than taking care of your grandson twice a week for two hours, because it still leaves you useless for the rest of your time. After a few months you will be a sad version of yourself. Be prepared for life after your boss sends you on “retirement” and treat it like a job change.